Richard Edward Baldwin is Professor of International Economics at the Graduate Institute, Geneva, a part-time visiting research professor at the University of Oxford, Director of CEPR since 2014, and Editor-in-Chief of Vox since he founded it in June 2007. He was Co-managing Editor of the journal Economic Policy from 2000 to 2005, Policy Director of CEPR since 2006, and Programme Director of CEPR’s International Trade programme from 1991 to 2001. Before that he was a Senior Staff Economist for the President's Council of Economic Advisors in the Bush Administration (1990-1991), on leave from Columbia University. He did his PhD in economics at MIT with Paul Krugman and has published several articles with him. 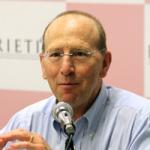